Edit
watch 01:32
She-Hulk Trailer Dropped - The Loop
Do you like this video?
Play Sound

"And the world is doomed to be destroyed, but this here... this is our ark, and I am Noah."
―Noah[src]

Noah, also known as Hanno Tauber, was a dedicated follower of Sic Mundus. He was the son of Bartosz and Silja Tiedemann and the brother of Agnes Nielsen.

Following the apocalypse, he was in a relationship with Elisabeth Doppler. They had a daughter, Charlotte, who was kidnapped as a baby. He dedicated his life to reuniting his family and realizing Adam's prophecy of paradise.

On Adam's instructions, he posed as a priest in Winden and kidnapped young boys for time travel experiments.

Noah believed he was working towards a greater purpose: to elevate humanity by controlling time travel, which would make it possible to rearrange events and escape the predetermined cycle of suffering.[5]

In this battle, he saw himself as an important savior-like figure, comparing himself and his chair to the biblical Noah and the Ark.[5] He believed he was on the side of the light while his opponent Claudia Tiedemann was on the dark side. Though he was aware of the cruelty of his fatal experiments on children, he saw them as necessary sacrifices for the greater good.[6] 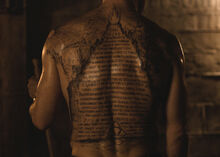 He was a priest, and expressed, on at least one occasion, a belief in God as a creator of the universe, and that God had a plan for every human being.[7] In another conversation, however, he denounced the notion of God and asserted that the universe is nothing but pain and chaos.[5] He seemingly also held beliefs related to Hermeticism, as he had a tattoo of the Emerald Tablet across his entire back.[8]

Hanno Tauber was born in 1904 to Bartosz and Silja Tiedemann. His birth name was presumably Hanno Tiedemann since his parents used that surname, but Noah's birth surname is never confirmed. His mother died while giving birth to his younger sister Agnes in 1910, when Hanno was six years old.[1]

In his teens, Hanno became a follower of the secret society Sic Mundus and was given the name Noah by their leader Adam. Noah was a dedicated follower and believed in Adam's prophecy that they would be brought to paradise if they followed his path.

In 1921, Noah participated in the excavation of the time travel passage in the Winden caves alongside his father Bartosz. Noah asked his father if he still believed in the prophecy, and perceived that Bartosz had lost his faith. Bartosz remarked that it was interesting that Adam sent Noah, though he had expected it, and told Noah to ask Adam why he took him in and chose to call him Noah, before Noah killed Bartosz with a pickaxe.

Noah felt conflicted about his actions and received a visit from his older self. The young Noah asked him how to tell good from evil, and his older self told him it was by only listening to himself, and assured him that everything has a purpose which would be revealed to him in time.[9]

When teenage Jonas Kahnwald arrived from the distant future, Noah was waiting for him. He took Jonas to the church to meet Adam in the Sic Mundus headquarters.[10] On the last day of the cycle before the apocalypse, Noah’s older self told him: “If you knew what I know now, you wouldn’t do what you must, which enables me to get to this moment,” but assured him that they are never free in their will or actions.

Teenage Noah was sent on his first time travel to 2020, where he encountered an adult Jonas and gave him a letter from Martha Nielsen. He told Jonas that Adam – Jonas’ future self – said that they would become friends but Jonas would betray him. He left for the bunker to take shelter from the apocalypse, where he met Elisabeth Doppler for the first time.[2]

Following the apocalypse, Noah lived in the caves underneath the post-apocalyptic Winden. After Peter Doppler was killed, Noah took his daughter Elisabeth Doppler under his wing and they lived together in the caves.[11][12] He would tell her about the prophecy of a future paradise. They uncovered the "Sic Mundus Creatus Est" door in the corridors of the caves, but the time travel passage was closed.

When the teenage Jonas tried to hang himself, Noah came to his rescue and explained that Jonas cannot die because his older self, Adam, already lives. To prove it, Noah handed him a loaded gun, which jammed every time Jonas tried to shoot himself with it.

For two decades, Noah lived with Elisabeth and they had a daughter, Charlotte. Meanwhile, he worked with Jonas and Claudia Tiedemann to stabilize the time travel portal in the nuclear power plant. Noah had growing doubts about Claudia’s real intentions and believed that she was sabotaging her own work. In 2041, Noah and Elisabeth’s daughter was kidnapped, and Noah believed that Jonas and Claudia were responsible. He promised Elisabeth that he would find Charlotte and bring her back.

Noah time travelled to 1920 where he met his younger self and went to find Adam – the older Jonas. Adam told him that Claudia was responsible for the kidnapping of Charlotte, and that the missing pages from the triquetra notebook would lead him to Charlotte and his paradise.[1]

Adam appointed Noah as a pastor in Winden and told him that Helge Doppler would assist him in his mission.[1] Noah posed as a priest in the parish of Saint Christopher in both 1953 and 1986 simultaneously, as he used the passage in the caves to time travel.

In 1986, he also worked as a counselor in the Winden Hospital, while he and Helge built a time travel chair in a bunker in the forest. Noah visited the young Mikkel Nielsen in the hospital in 1986. The boy had come from 2019 through the passage in the caves. Noah challenged him on his belief in the Big Bang theory and evolution, stating that everything had a beginning, and god had a plan for everyone.[7]

Helge at last confronted Noah while they were working on the machine and told him he did not want to help in abducting any more children, but Noah convinced him to remain true after describing the biblical proportions of their mission.[5] They kidnapped the teenage Jonas Kahnwald, who had time travelled from 2019, and locked him in the bunker in time for the opening of a wormhole, as per the instructions of the triquetra notebook.[4]

Noah finally prepared for the last cycle of the time loop which had Winden caught in suffering and to bring about the apocalypse.[9]

Noah established contact with a young Bartosz Tiedemann in 2019 to recruit him to his cause. He gained his trust by making accurate predictions about the future, including that his grandmother Claudia would visit him.[5][7] He later gave Bartosz the triquetra notebook and told him about the war between the light and the shadow to control time travel. He assured Bartosz that they belonged to the light despite the dark nature of their actions, while Claudia, with Jonas as her puppet, belonged to the shadow.[13]

In 1953, Noah comforted Greta Doppler after her son Helge disappeared, while he simultaneously cared for the young Helge, who had been transported through time, to 1986. Noah finally managed to get the time travel chair working, and successfully transported Helge back to 1954. Helge was traumatized and did not speak, but Noah coaxed him into reading a passage from the bible, to Greta’s wonder.[14]

In 2019, during the kidnappings of the young boys, Noah approached young Elisabeth Doppler ( who will be become his wife in 2030-2041) and handed her a pocket watch with the inscription “For Charlotte.”[15]

Noah’s relationship with his sister Agnes was hostile at this point, and when they met in 1954, he told her that Adam would not take her back. As a peace offering, she revealed that Claudia had the missing pages from the triquetra notebook that he had been seeking for Adam. Noah approached Claudia, murdered her, and took the pages.[14] 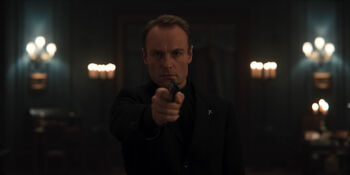 Noah went back to the Sic Mundus headquarters in 1921, just as his younger self was about to travel to the day of the apocalypse. Noah told his younger self that “if you knew what I know now, you wouldn’t do what you must, which enables me to get to this moment,” but assured him that they are never free in their will or actions. Later Noah tried to shoot Adam, but his gun jammed. Agnes entered and turned the gun on Noah, and killed him with Adam’s consent.[2]