"The distinction between past, present and future is only a stubbornly persistent illusion"
―Albert Einstein[src]

Dark is a German science fiction thriller family drama series created by Baran bo Odar and Jantje Friese. Set in the fictional small town of Winden, it revolves around four interconnected families haunted by their secrets, and contains elements of science fiction and fantasy.

When two children go missing in a small German town, its sinful past is exposed along with the double lives and fractured relationships that exist among four families as they search for the kids. The mystery-drama series introduces an intricate puzzle filled with twists that includes a web of curious characters, all of whom have a connection to the town's troubled history -- whether they know it or not. The story includes supernatural elements that tie back to the same town in 1986. "Dark" represents the first German original series produced for Netflix.

The series was created by Swiss director Baran bo Odar and German writer Jantje Friese. It was produced by Quirin Berg, Max Wiedemann and Justyna Müsch. All of the aforementioned had previously collaborated on the 2014 film Who Am I, which grossed $6 million at the local box office and won three German Movie Awards and the Bambi for “Best German Film.”[1][2]

Netflix approached Odar and Friese after seeing Who Am I at the Toronto Film Festival in 2014, asking if they could make a series out of it. Reluctant to repeat themselves, Odar and Friese instead pitched other ideas to Netflix, one of which was Dark.[3]

Dark was Netflix's first original series entirely authored, shot and produced in Germany.[1] The move into German television drama was part of the company's global strategy, with which they hoped to attract more foreign subscribers and boost their library of originals worldwide.[2]

Odar and Friese felt that German television was associated with something ugly and sad, and that all German series were either thrillers or crimes, so they wanted to create something of a higher quality for a universal audience. They were inspired by the Scandinavian Nordic Noir genre.[4]

Initially, Dark was an idea for a crime show they had written two years prior to being contacted by Netflix. They had another idea for a time travel feature film and they combined the two ideas.[5]

Having grown up in a small town themselves, the creators had a fascination with the subject of the darkness hiding behind closed doors in a small town. David Lynch's Twin Peaks, which deals with the same topic, shaped them in their teenage years.[4] They were also inspired by their childhoods in German small towns during the Chernobyl nuclear disaster, when release of radioactive materials spread fears of contamination.[6] Other influences are Stephen King and David Lynch.[5]

Before its release, the series was often compared to Stranger Things based on its premise and partial 1980s setting. However, Dark was already in pre-production when Stranger Things premiered and the series is much darker and not for kids.[5] Friese stated they enjoyed the comparisons, saying: "It’s really exciting because if all those people who watched Stranger Things will at least think about watching Dark, I think that’s a great opportunity for us."[3]

Some details had to be changed for the international audience to understand it. For example, some instances of sarcasm in dialogue did not translate well to English because of the difference in tone. However, Netflix were okay with keeping some things which only Germans would understand, as long as the overall narrative worked for everyone.[6]

The series concluded after a third season, which the creators had envisioned from the beginning, with Bo Odar commenting they did not want to end up like Lost.[7][8]

Netflix's backing allowed the creators to cast whoever they pleased, including unknown actors. Netflix told the filmmakers, "We don't really know German actors -- just get the best ones."[9] Bo Odar praised the creative freedom they got from Netflix. He said: "We could cast whoever we wanted, the actors who fit best for the role. Netflix gave us a budget and a couple of notes and let us do it."[10]

Principal photography commenced on October 18, 2016 and lasted for six months until it wrapped on April 8, 2017. There were a total of 151 shooting days including second unit shoots.[11] Odar directed all ten episodes.

Filming took place in Berlin and surrounding areas.[12] Much of it was done on location during winter, with many of the scenes set in rain. Actor Louis Hoffman said it was hard to always be cold and wet.[3]

The series was filmed in 4K High Definition on a special Alexa 65 camera.[13]

The series was scored by Ben Frost.

Netflix announced on February 24, 2016 that they had ordered ten, hour-long episodes of the series scheduled for release in late 2017.[1] Jantje Friese stated "The way Dark was embraced by Netflix was extraordinary. We’re so happy to be making this show in Germany for Netflix subscribers around the world to enjoy."[1]

In Germany, the first three episodes were screened to the public in cinemas in November. The lead actors and producers attended a special event at the Zoo Palast.[13]

Based on the teasers and trailer, Dark drew comparisons to Stranger Things, Twin Peaks, The Killing, The Missing, The Returned.[17][18][19][20] Writers particularly took note of the similarities with Stranger Things, another Netflix original series with a missing child storyline and 1980s setting.[21][22][23][24][25][26] 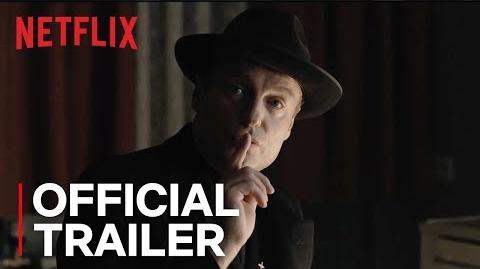