What's on your mind?

Got a fun little announcement for you all.

We’ll be starting up community Watch Parties here at Fandom! The first one will be on Friday, April 9, at 5 PM EST, and we will be watching none other than Stranger Things!

Mandy will be hosting these every Friday in April at the same time until we finish Season 1, so come join us for some fun at https://scener.com/fandom. Give us a follow there if you want updates on when we go live. You will need to use your own Netflix account to be able to watch along, as well as have the Scener extension downloaded on Google Chrome (https://www.scener.com/get).

Anyone is welcome to join and come hangout, so we hope to see you there :)

My name is Chris, a Fandom Wiki Representative working with this community.

Today I have an exciting project to share - Fandom announced in a blog that it would be devoting two weeks on a quality of life project - a two-week bug squashing effort!

So my question to you is - are there any bugs that have been really annoying on Fandom that you would like fixed? These can be big bugs or small bugs - any report is appreciated!

Please include below the following to help us work on these issues:

The more information you can provide, the more we can pass on to engineers who can tackle the problem. Even if it seems obvious detail, it will make it much faster to fix these bugs. The project will run for 2 weeks, so the faster we can know about your issue, the more time there is to get it fixed.

Please post bug reports below or alternatively, my message wall or Discord at Spongebob456#7402 are always open. Thanks! :)

Hi all. I'm just watching Dark for the first time and I'm up to episode 6 in season 1. One thing that bothers me is the scene where Charlotte is looking through the wildlife cam footage and sees Peter's car at the time of Mikkel's disappearance, that's in episode 4.

Now, Mikkel got missing on the night of November 4th, between 21:30 and 22:30. However, in that scene, Charlotte is watching footage from October 25th as evident by the dates and filenames on the SD card from the wildlife cam.

So my question is, is that date discrepancy something that will later be explained in the show, or is it a mistake by the writers? Please no spoilers, thanks!

So I’ve just finished series 2 episode 6 and WHAT. OK SO HOW CAN JONAS DO THIS. Honestly look at Mikel/Michael. He didn’t even want to do this, he just got told to and I CRIED LIKE WHY. JONAS AND MIKEL HAVE BEEN THROUGH TOO MUCH AND NOW JONAS IS EVIL?!!! I’m so annoyed and upset. Oh and also Charlottes dad is Noah wth. Ok so this was not a rant but no one who I know watches this so I turn to the internet lol. I’m so sorry.

The one to the right of Michael/Mikkel ?

I cant understand this scene,if they saw each other already when they were young,that means the travel to orginal world already happened,no?(and how can u know that we see is the young alt Martha and not the one from Adams world?) 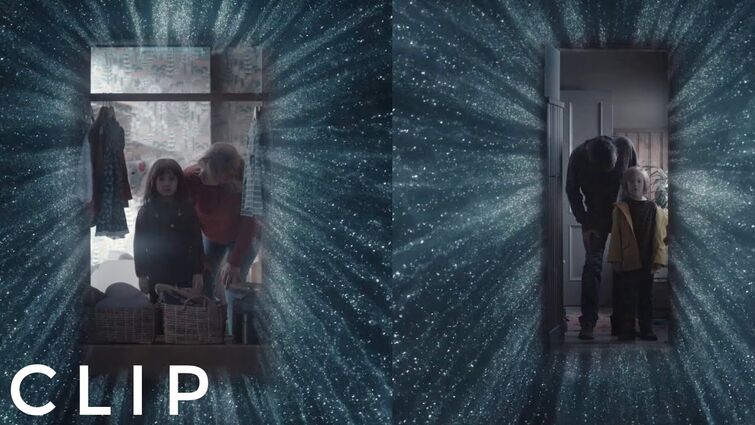 I noticed at the dinner scene at the end of the last episode Alexander is not there. His birth was not created from time travel so he should still be alive. Did he and Regina just not get married? Im assuming they would not have met because Ulrich and Katharina wouldnt have been bullying Regina.

Aeronautical engineer Robert A. Heinlein must have been bored to distraction by his work at the Philadelphia Naval Shipyard, a problem he solved by recruiting professor Isaac Asimov to join him there, and speculating in print about the paradoxes that would result from time travel. An early story, "By His Bootstraps", and the later "-All You Zombies-", presage in some detail the paradoxes of Dark.

"By His Bootstraps" is the source of the name "bootstrap paradox" for the appearance of an entity with no apparent history. Graduate student Bob Wilson is transported through a Time Gate 30,000 years into the future, where he meets the chieftain Diktor. At Diktor's insistence, he returns to the past, where he accumulates artifacts that will assist him in seizing power. To make a long story short, Bob turns out to be Diktor, who travels to his own past to recruit himself.

"-All You Zombies-" plays with the paradox of being one's own ancestor. It defies simple explanation. An intersex child, raised in an orphanage as a girl, grows up and eventually has gender reassignment surgery. As a grown man, he travels to the past and rapes his previous self as a teenage girl; she gives birth. Then as an older man, he places the baby with the orphanage.

Parallels to the rise of Adam and the tangled lineage of the families of Dark are readily apparent in these pioneering works.

I am on my second re watch of Dark and confused about one thing. Did young Noah always give Stranger the letter saying he needed to save Bartoz Magnus and Franziska and they always go to 1888? Has that always been part of the cycle?

Its bothering me because Adam is already in 1921 by the time young Jonas meets him. So at some point Adam would have traveled to 1888 as the Stranger.

Claudia of Eva's world says that each of the three times the Passage opens and closes it leaves behind Cesium residue, which is the fuel for time travel, but where is the residue when older Jonas closes it in 2019 and young Jonas opens it in 2020? The only time residue was left was in 1986 when the Passage was opened for the first time and Bernd stored it in barrels.

What's the name of that zodiac image Elizabeth seems fascinated from looking at and that also is in Adam's lair? The one with those guys blowing wind at the two edges of the picture.

It seems the ultra portable spherical time machine come from Eve's world. But Magnus and Franziska from Adam's world had one when they travel to Eve's world to pick up young alt-Martha. How did they get it? Presumably it was given by Adam, who seize it from alt-Martha whom he locked up.

But how did Martha get her own orb? She didn't seem to get any from her older self. That means sho mignt be using the same orb used by Magnus & Franziska. But that would mean that specific orb has no origin. It just exists... yet another bootstrap paradox?

We know Elisabeth got it from Noah who told him that it belonged to her mother. At that time Noah was not aware that Charlotte is his daughter. Charlotte herself doesn't seem to recognize the watch. So, Noah probably thought it belonged to Charlotte only because his younger self noticed future Elisabeth had it with her.

Then we see in 2041 Charlotte took the watch while kidnapping her newborn self. But we also see Oldman Tannhaus had that pocket watch back in early 1800s.

So the question is how did Noah get the watch in the first place?

That has me confused.

In “The Origin”, we learn that Albers was Helene’s last name ever since she was young. This confused me, because Katharina’s father was named Hermann Albers. How could Helene have the same last name as her apparent lover.

The only idea I could think of is that Helene and Hermann were siblings, and that the latter raped her. Although I don’t have evidence to back this theory up, there are LOTS of characters born via incest.